In this post we begin by presenting a happy discovery for the season: a pop-art take on Santa’s “eight tiny reindeer” as named in Clement Moore’s poem, “‘Twas the Night Before Christmas.” 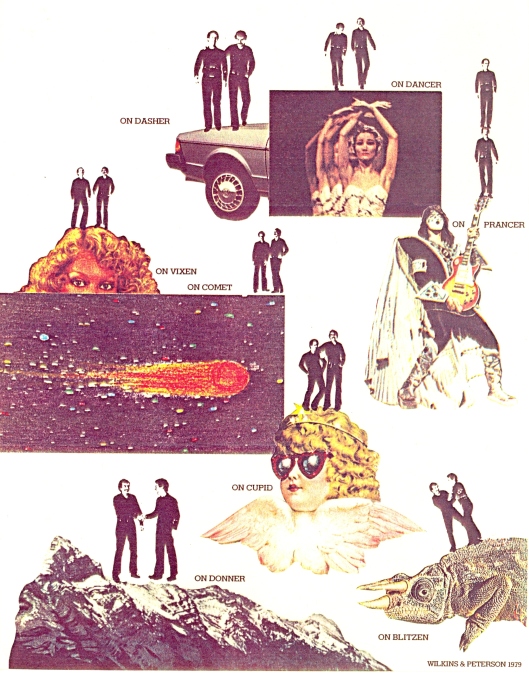 This collage is the work of artists Tommer Peterson and Warren Wilkins, who contracted with the King County Arts Commission to provide graphic design for its 1979 Earthworks Symposium.

The Earthworks Symposium commissioned internationally recognized artists to develop designs for large-scale sculptures, transforming “blasted landscapes,” such as former mining sites and landfills, into public art that would double as open space. 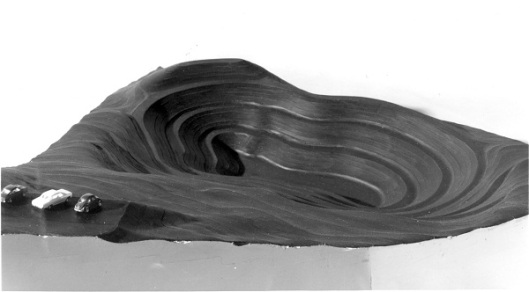 One Earthworks artist proposed digging into the earth and installing a thick glass wall to reveal a cross-section of a half-century’s worth of garbage accumulated in a former landfill, near what is now Seattle’s University Village.

Another envisioned an earthwork that would be sculpted out of a gravel pit in south King County as it was being excavated, with cooperation from the mining company.

A third artist proposed transforming part of the former Sand Point Naval Air Station, in the area that is now the Magnuson off-leash dog park, into a large-scale, sculptural metaphor for generating ideas — a “thought factory.”

In the spirit of play 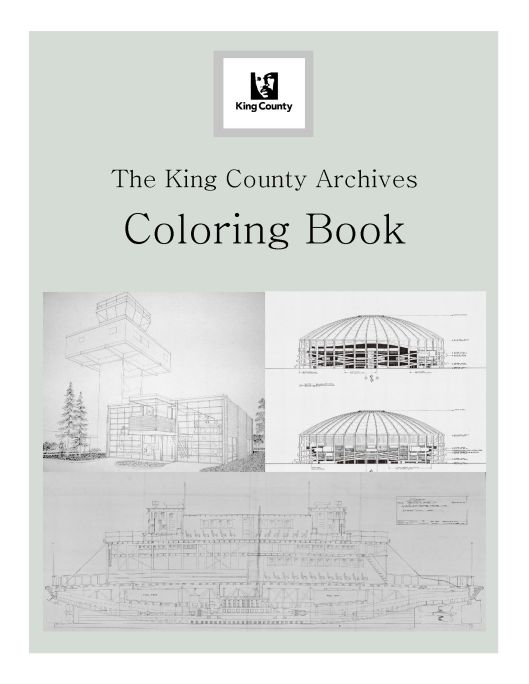 Regardless of how, or if, each of us celebrates this season, let’s root for a 2017 that brings some room for play and imagination.

In that spirit, we are happy to share our first-ever King County Archives coloring book, featuring some of our favorite line art from the collection. (Here’s your chance to do what you would never be allowed to do in an archives: color the records!)

Happy Holidays from all of us at the King County Archives. 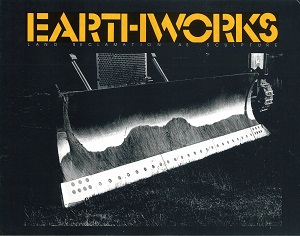 The King County Archives’ 2013 exhibit, King County Earthworks: Land Reclamation as Sculpture, describes the history of the Earthworks Symposium and presents images of artists’ drawings and models along with photographs of proposed earthwork sites, artists, and construction of the Morris earthwork. 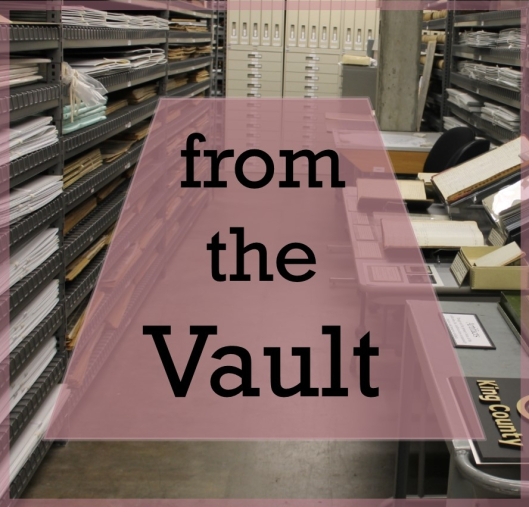 The holiday season has begun, and November’s soggy weather inspires many to head to the movies with visiting relatives, ready to take in the latest blockbuster films.

In this post, we look at records from the archives that document perceptions of a once-popular venue, the drive-in theater.

Records of land use applications, hearings, and appeals can provide a view of individuals and communities responding to growth and change. The King County Commissioners’ zoning files, dating from the 1950s and 1960s, document the public response to several proposed developments, including a golf course, an air strip, and a drive-in theater.

The rezone file that documents approval of a drive-in theater includes snapshots of the affected rural neighborhood, with its modest homes, small businesses, a trailer park, and a nursery. 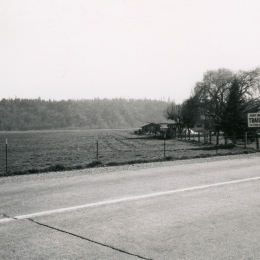 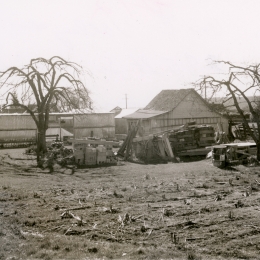 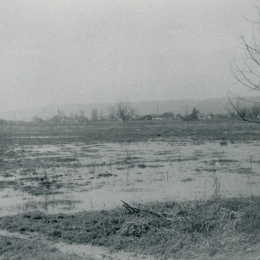 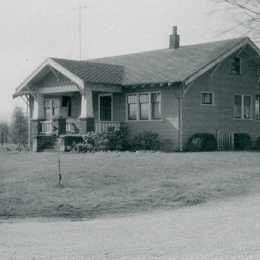 [Views of neighborhood around 86th Avenue South and the East Valley Highway, 1965. The first set of photos above was taken using a Polaroid camera, the second is on Kodak paper.]

In my back yard?

In 1965 when a new drive-in theater was proposed for this community, local residents objected. Petitions and letters expressed concern over traffic, diminished property values, noise, light, and litter that the theater might bring.

One letter to County Commissioners recognized that new businesses would inevitably come to the neighborhood — just off the East Valley Highway between Kent and Auburn — but warned that a drive-in might define the area’s character and limit the type of commercial growth.

Along with practical concerns came strong moral objection to the movies themselves and worry over their potential negative influence on local children and youth.  Some lamented that drive-ins had changed from being family-oriented venues to showing “unwholesome” films to an “unwholesome” audience. 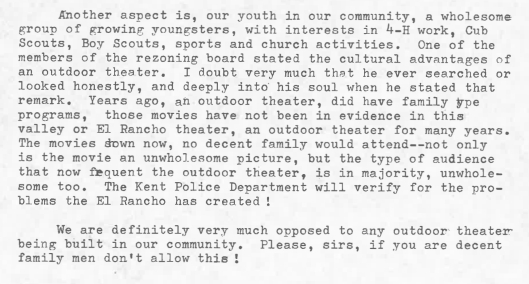 The Kent Police Chief responded that behavior at drive-ins was manageable. 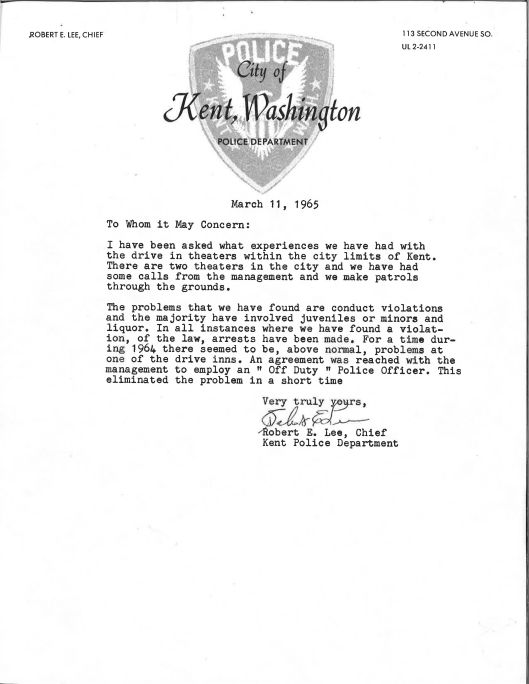 The Planning Department’s logo represented a balance of industrial, agricultural, business, and residential uses, connected by highways and roads, seemingly pulled into an asymmetrical shape by the natural form of a waterway.

Facilitating development while maintaining quality of life is the perpetual challenge for local planners. And, in spite of the residents’ objections and appeal, the department recommended approval of the rezone. [Sketch of the proposed theater as it would appear from the road.]

The Valley Drive-In opened in 1966 and became a popular destination, expanding over time from a single, sixty-foot-high screen, to a six-screen multiplex.  It outlasted other drive-in theaters in King County, staying in business until 2012. Feliks Banel’s article from May of this year, “Auburn’s abandoned Valley Drive-In is a spooky ‘graveyard‘” provides a nostalgic view of the theater and drive-ins generally.

While researchers at the Archives most frequently use land use and zoning records to answer a specific technical or legal question, the records also document how neighborhoods change over time and how people respond to that change. The records of this rezone show a small community’s assertion of its values, which they felt were threatened by a new venue that might allow uncontrolled behavior and exposure to what were regarded as negative social influences. Parents today, concerned over youth’s access to the unlimited content of the Internet and unsupervised time, might relate to these fears. As with many archival records, this zoning file reminds us that what seem like new issues might in fact be perennial themes, reemerging in new forms.

The Archives just digitized “Boeing Field: the Making of Milestones,” a documentary about King County International Airport, produced by King County around 1990.

Using still photographs with voice-over narration, occasional sound effects, and a musical theme fit for a ’90s action TV show, the video tells us about the history of the airport and gives us an understanding of Boeing Field’s role in the region at the time the video was produced, promoting the airport’s importance to the local economy and its role in bolstering Seattle’s status as a major city.

The video was a timely discovery, as we recently provided a number of historical photographs to the King County International Airport for use in celebration of the Boeing Company’s 100th anniversary.

Starting at 4 minutes and 48 seconds into the video, we learn of Boeing Field’s development from a racetrack (horse racing and automobile racing took place at the Meadows) to an international airport owned and operated by King County.  The brief history highlights Boeing Field’s significance in the aviation industry and during World War II.

A copy of a copy?

“The Making of Milestones” as we see it appears to have been created by video-recording a screen projection of the original, which may have been film or another video format. This version could very well be a third or fourth generation copy. Such copies are frequently all that remains in collections of audio-visual recordings.

Because videotapes are quickly becoming unplayable as their life spans run out (see The Magnetic Media Crisis), digitization was a crucial step toward preservation. We were able to digitize this video thanks to our participation in Moving Image Preservation of Puget Sound (MIPoPS).

As with videotape copies, the origins of photographs can be murky. Compared with today, cameras in the early 20th Century were uncommon, but reproduction allowed the same image to be acquired by many.

Most of the earliest Boeing Field photos in the King County Archives are copies of photos that also exist in other repositories and/or that were created by private parties. King County staff collected these photographs because they documented the airport’s milestones, and in that sense they represent a record of the agency. But we don’t always know their origin.

The above photo of Charles Hamilton, who made Seattle’s first heavier-than-air flight when he flew his bi-plane (first into a pond, and the next day with more success) to entertain crowds at the Meadows, appears in the King County Archives and elsewhere. Although the photograph was not originally created by King County staff, the Archives’ collection includes a negative copy, enabling good-quality reproductions.

Most of the later Boeing Field photographs in the  collection were produced by or for King County to document airport events and facilities, though in some instances individual images may have been collected by staff from other sources.

The above photograph shows Boeing Field when it served as the regional airport for commercial passenger airlines, pre-SeaTac.  The charming employee photo below is from a series of photographs taken in 1979 during the dedication of a new hangar for use by the Federal Aviation Administration.

More historical photos of Boeing Field are now on our Flickr page. You can also search our collection database or contact us to learn about other records of the King County International Airport, including agency records, historical maps and drawings.

The image above serves as a nice segue. Taken at Boeing Field, the photograph is from the King County Park System. We see participants in the County’s program for children with disabilities ready for departure on an airline trip.  In the first week of October, Bytes and Boxes will focus on this innovative Parks program, as we commence our celebration of American Archives Month, for which the Washington State Archives has decreed this year’s theme to be “Washington Loves Parks.”

Look here for more on King County Parks throughout the month of October!

Our colleague Luci Baker Johnson of Historic Seattle shared her discovery of a 1918 Seattle Times article describing an organizational ancestor of the King County Archives.  The story describes the “hundred tons” of records, “the approximate aggregate weight of the joys and troubles of Seattle’s inhabitants since the founding of the city….”

Many of the records, then stored in the City-County Building, exist in our collection today, while some are held at the Puget Sound Regional Branch of the Washington State Archives and at other local repositories.  It is also likely that many more of the 200 tons of records described in the article were purged over time under various 20th Century records management regimes.

The beginning of the Seattle Times article is shown below.

One thing that hasn’t changed since 1918 is the regard for one of our collection’s treasures, the first King County marriage certificate, issued to David Denny and Louisa Boren in 1853.  Below is a recent photograph of the certificate that was also pictured in the 1918 article.