The King County Archives recently updated one of its older record series, County Engineer wharf files 1899-1987 (Series 375). Staff and volunteers added more maps and drawings to the series and improved descriptions of new and existing record materials. The old wharves themselves are mostly long gone, part of a past that seems increasingly far away. But the records that remain remind us that water-based transportation once was an important mode of travel to people throughout the Puget Sound region –– as it may be again.

Construction and maintenance of about 100 wharves (also called docks) was a significant part of King County’s public works function during the first half of the twentieth century. Vessels on Puget Sound and Lakes Union and Washington carried passengers and freight. So wharves became an extension of the county’s road system, connectors between water and land transportation.

Most of the wharves were publicly accessible. A few wharves served private resorts or camps but were maintained by King County if they were at the end of public roads.

From about 1900 to 1939, King County also operated, or contracted for, ferry services across Lake Washington and to Vashon Island. County ferry docks were located in Seattle (Leschi and Madison Park), Kirkland, Bellevue, Medina, Des Moines and on Vashon Island. 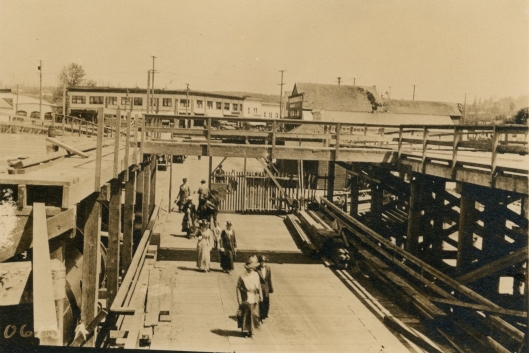 With the growth of land-based transportation in the 1930s, and construction of the first floating bridge across Lake Washington in 1941, water transportation became a lesser county priority. Private companies, and then the state of Washington, took over Vashon car ferry service. After World War II, King County worked to remove abandoned and unsafe wharves.

Other wharf sites became parks. Some of today’s municipal parks—such as Dumas Bay Wildlife Sanctuary in Federal Way; Meydenbauer Beach Park (under development) and Enatai Beach Park, both in Bellevue; and Kennydale Beach Park in Renton—had their start as county parks on the sites of former county wharves.

This Parks Department photograph may have been taken in the mid-1960s to publicize the redeveloped Dockton Beach Park. (Series 467, Box 2, Folder 29)

Water taxis: an alternative to cars

At the end of the twentieth century, transportation planners faced increasing challenges with automobiles, including traffic gridlock, longer commute distances, and air pollution. To provide an alternative for some commuters, in 1997 King County initiated a new foot-ferry service, first to West Seattle and, in 2007, to Vashon Island. King County also built new docks and waiting rooms to serve the new passenger ferries.

Textual materials include copies of letters and memoranda to and from the county Commissioners, engineers and inspectors, and the general public. 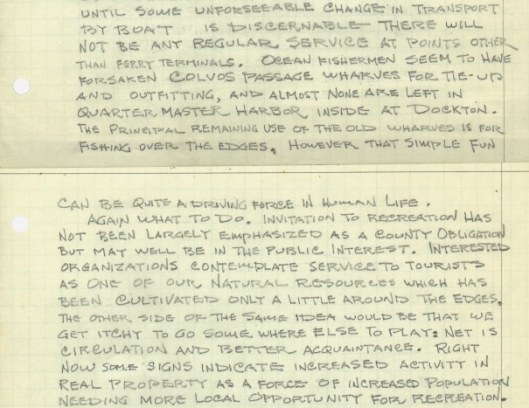 This 1926 drawing shows how King County brought water to a drinking fountain at the Vashon Heights ferry terminal (predecessor of the present state facility at the same location). (Series 375, Box 8, Folder 8) (Click on image to view full drawing)

Black-and-white photographic prints and negatives may show some or all of the following:

In the background of this 1936 image of the Tahlequah ferry terminal, Vashon Island, the Asarco copper smelter smokestack in Ruston (once the world’s tallest at 571 feet) emits its notoriously toxic pollutants. The stack was demolished in 1993. (Series 375, Box 5, Folder 19) 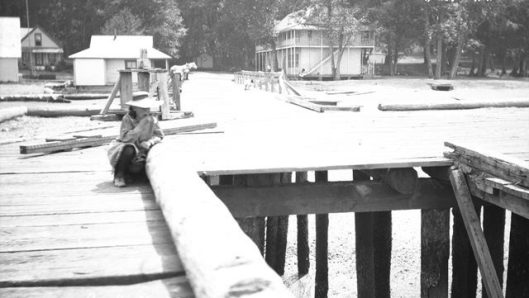 Archives staff also identified photographs of wharves found in other record series, and cross-referenced them to Series 375. For example, several images of Wharf no. 239 at Stone’s Landing (now Redondo) were found in a large series of general engineering photographs. The images show a party of King County inspectors at the wharf, possibly following the fatal collapse of part of the structure in 1906. The unidentified girl appears in several photographs.

Sorting out wharf names and numbers

During their active lives, wharves were identified by a county wharf number and by a name, or names. New archival work in 2016-2017 centered on accurately associating wharf numbers with wharf name(s) and establishing a standard name for each wharf. 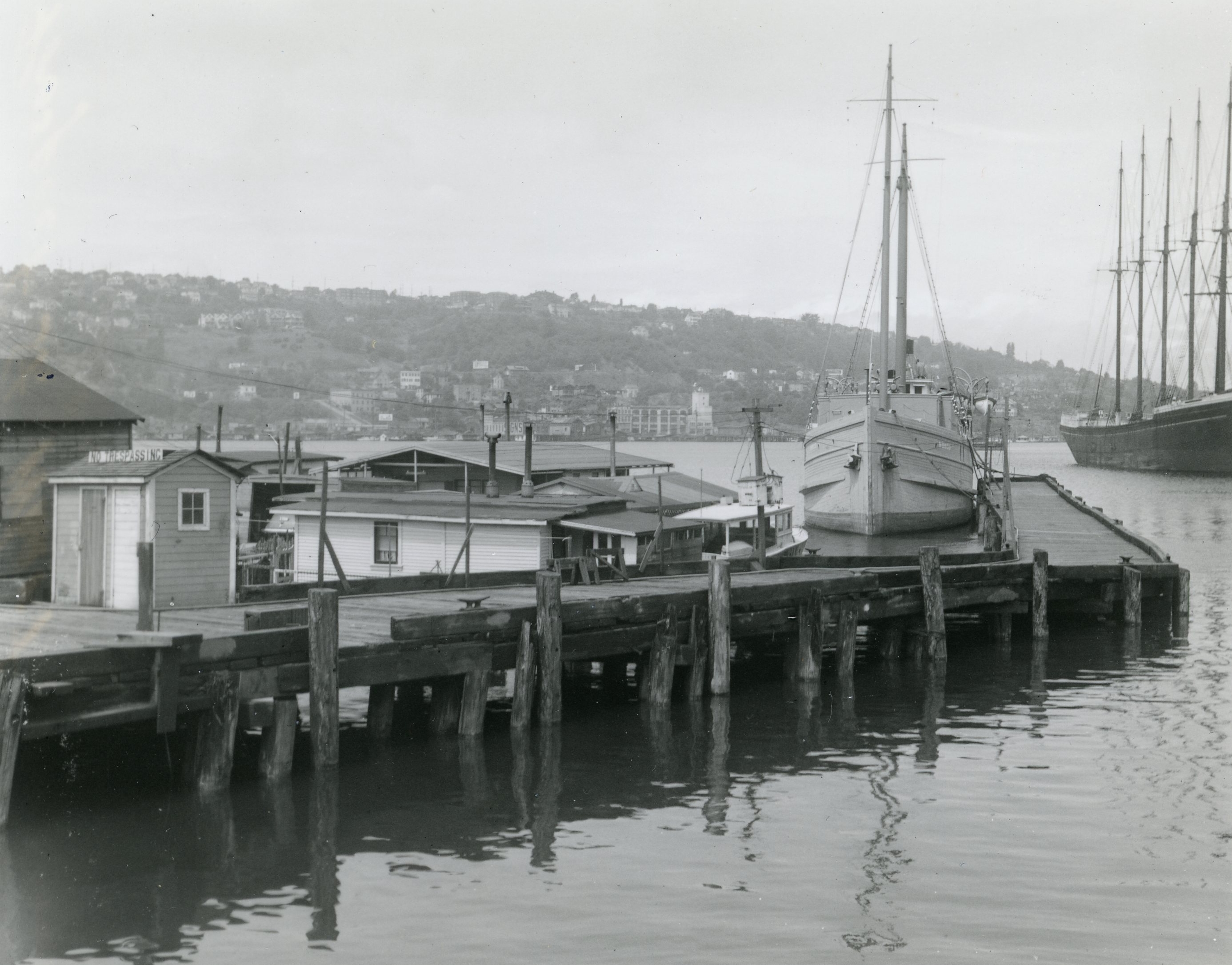 An authority cross-reference file of variant wharf names was created. The standard names and numbers were added to existing descriptions of record material and to graphical material (maps, plans, and drawings) that were described for the first time.

About 250 professionally-conserved, hard-copy maps and drawings of wharves had previously been transferred to the Archives by the King County Road Services Division, as part of that agency’s Map Vault preservation program. Archives personnel revised existing descriptions of the drawings so that they matched with related materials in Series 375. Digital images of these maps and drawings are currently available through the King County Road Services Map Vault.

Wharf and Dock History Records: A Resource for Many Researchers

Series 375 is an excellent source of evocative and nostalgic photographs of Puget Sound and Lakes Washington and Union. But these records can also be used in different ways for different types of research. Some examples follow.

One of King County’s first parks (1938) was developed on Meydenbauer Bay at the site of a former ferry landing. Built with federal Works Progress Administration (WPA) funds, the park later fell into disrepair and was abandoned. It is now being redeveloped by the City of Bellevue. (Series 400, Item 95-005-2981)

Students of recreation and leisure activities can trace the development of county and municipal parks at former wharf sites.

The village of Lisabuela, on the west side of Vashon Island, was the site of a popular resort from the 1920s to the 1950s. The steamer Virginia V (still sailing) and her four predecessors served the Lisabuela dock. (Series 375, Box 5, folder 1) 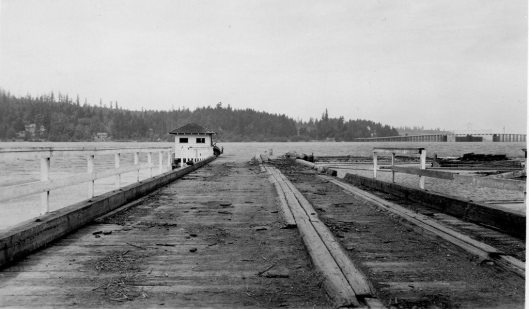 Textual records associated with Newport Wharf no. 754 on Lake Washington describe the wharf’s use by logging companies as a dump site for logs being floated to sawmills. The second East Channel bridge to Mercer Island can be seen in the background of this 1932 image. (Series 375, Box 5, folder 10)

Researchers of King County’s industrial and commercial history may find useful information in these records.

A New Era of Water Transportation?

King County, having re-established passenger ferry service to West Seattle and Vashon Island, has considered future expansion of water transportation to Seattle from Kenmore, Kirkland, Renton, Shilshole, and South Puget Sound (2007 King County Passenger-Only Ferry Project Briefing Paper). What once was, may be again. And documentation of new county ferries and facilities will create new records for future researchers.