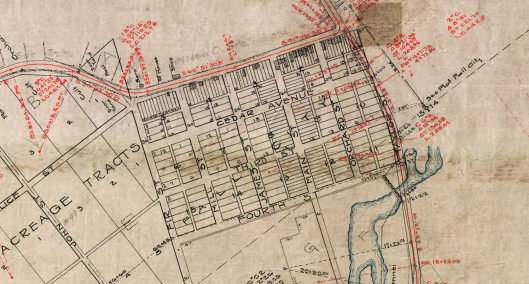 In an earlier blog post, we talked about the secondary research value of aerial photographs. Secondary value is research that can be done in records that is different from the purposes for which the records were originally created.

In addition to aerial photographs, another good source of secondary research value are the historical records of the King County Road Services Division. These records were originally created to document road construction or maintenance, but can also provide a wealth of information about historical structures, property ownership, or geographic or environmental conditions.

The bulk of these documents are available online, in the Road Services Division’s Map Vault, an online repository of nearly 200,000 plans, drawings, surveys, and aerial photographs. Secondary uses of these records include:

This post will examine how to locate evidence about an ancestor in road project records and what these records can show.

Road surveys and road establishment files (also called Road History Packets) can be rich sources of land ownership information, if your ancestor owned land in a part of King County which was unincorporated at the time and if county forces did construction or maintenance work nearby. 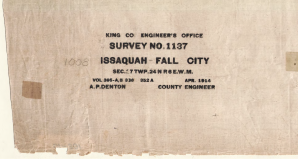 Title block from the bottom left corner of the Issaquah-Fall City survey map, containing information that can be used to locate it in the Map Vault

In April 1914, as part of a bond issue to reduce steep grades on county highways, county surveyors created this 3′ x 11.5′ map, showing the alignment of Issaquah-Fall City Rd. (Today the route shown in this survey follows part of Interstate 90 until turning north and following Preston Fall City Rd SE.)

Part of determining the route of the road required documenting who owned property along the route and thus would be affected by construction – how access and travel would be improved or hindered, what right-of-way would need to be acquired, or what structures or other property might be taken down or relocate to accommodate the road.

In this survey, just south of Fall City and a cemetery owned by the International Order of Odd Fellows, is the property of William Wallace Pulver. Censuses and vital records indicate that Pulver was born in May 1839 to Harvey and Providence (or Prudence) Pulver, probably in Ontario, Canada. Sometime in the 1890s, he moved to western Washington, and began to purchase land in and around Fall City. In the detail below, the alignment of the road runs right through this part of Pulver’s land, where he had apple trees, a water closet, patches of raspberries and currants, and fencing around his property.

This survey map also points to a book of survey field notes, discovered in the notation next to the intersection between the right-of-way and Pulver’s fence: “Fence Post Vol. 352 ‘A’ pg. 13.” That survey field book is also in the Map Vault and provides more detailed notes about the survey around Pulver’s garden. Knowing that William Pulver had a flushing toilet, a garden, and potentially an orchard not only gives us a glimpse of life in the early years of the county, but sheds light on Pulver’s occupation and economic status.

That’s great, but how do I find my ancestors in these records anyway?

In the 1800s and early 1900s, King County roads requested by citizens were initially named after the main petitioner. Thus, Seattle founding father David Swinson “Doc” Maynard shows up in the Map Vault as a petitioner of at least two roads and can be searched for by entering his last name into the “Project/map name” field.

An example using a surname

Clicking the link for the second result to download the Road History Packet for D. S. Maynard Road No. 2 provides not only Maynard’s original signature but also the reports to the King County Commissioners, written by Maynard himself as foreman of the crew surveying the route.

This search by surname only works for the main petitioner – in this case, David “Doc” Maynard. Often the property owner petitioning for the road would recruit his or her neighbors to support the petition; these additional signatories are not indexed, unfortunately. However, this means that searching by the name of a known neighbor may yield documents that also mention the ancestor. Look in late 19th- or early 20th-century censuses for the people that lived nearby and search by their surnames as well.

The Map Vault is also searchable by location (section, township, and range) or by road name, so determining the location of an ancestor’s land through other records may also provide information that can be used to search the Vault.

The Archives recently accessioned a small collection of records from the King County Department of Transportation’s Transit Division. These records include photographic prints, negatives and slides that were produced in planning for improvement or expansion of Metro bus bases.

A basic principle in archives is that records can have value beyond the original purpose for which they were created. Although we can certainly learn about the physical layout, equipment, and condition of the Metro bases in the 1980s and 1990s from this collection, the photographs also give us other information. Many photographs in the series show building interiors and exteriors, and of course, buses.  Here we will be talking about aerial photographs of the different Metro bases that were taken in 1991 and 1992.

Central Base (Seattle), 6/18/1991. Photographer Ned Ahrens.  (Central Base is in the lower-right quarter of the image.)

Looking into the past

One way to use aerial photographs is to see how a place has changed over time. The Kingdome, seen in the above photograph, is a memory (to some), now replaced by CenturyLink Field. Below, photographs of Seattle’s “Hooverville,” taken during the Great Depression, show the same part of the city — from closer-in and at a lower angle — as it appeared in the 1930s. Landmarks like Smith Tower in the image on the right and the waterfront on the left help us compare the cityscapes. 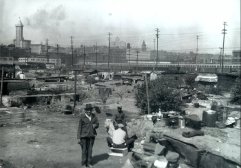 The Metro base photos are taken at an oblique angle, which allows us to see topography, building height, and details of the urban landscape that we would not see in a straight vertical shot. Oblique photographs show space in linear perspective (more distant objects appear smaller), and lenses can introduce distortion, as below.

Vertical aerial photography minimizes distortion and was first introduced for use in mapping. The King County Assessor’s WPA-funded 1936 Land Use Survey project combined data from traditional field surveying with systematic aerial photography to create a more accurate record of property throughout the County.

In an archival collection of agency working files, notations can add meaning to a record. The below photograph of Ryerson Base (west of Central Base) came with a plastic overlay that indicates in striped tape a path that now, over 20 years later, is a segment of the SODO Multi-Use Trail, adjacent to Sound Transit’s light rail tracks.  Related records in the collection may tell us the intent behind highlighting the right-of-way as part of facility planning in the 1990s.  Without that context, we can guess but can’t know its original purpose.

Aerial photography has many applications in the natural sciences, such as geology and hydrology, as well as in social science and engineering fields, such as archaeology, transportation, and urban planning. In the below image, we see a mix of light industrial uses alongside treed areas and bodies of water near the Bellevue Base. Though the landscape is not idyllic and can hardly be seen as “green,” we are reminded that the this type of space supports functional uses upon which we depend, including Metro’s environmentally friendly bus service. 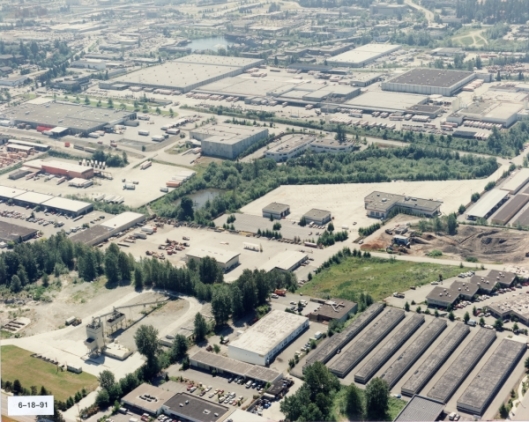 Seeing the land from bird’s eye view can help us reflect on the spaces we use and inhabit. Aerials can be beautiful as photographs and compositions, with their unexpected patterns and dramatic forms, combined with familiar landscapes and the details of daily life. Following are a few more images from the series. 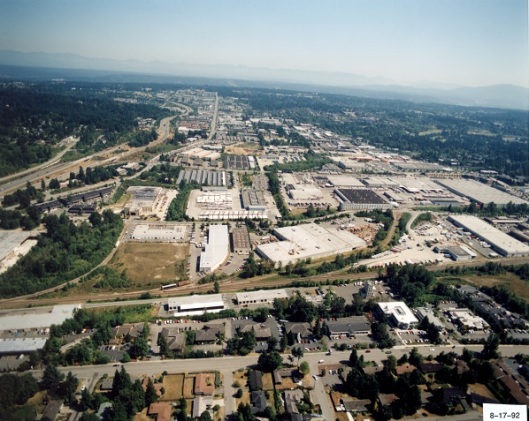 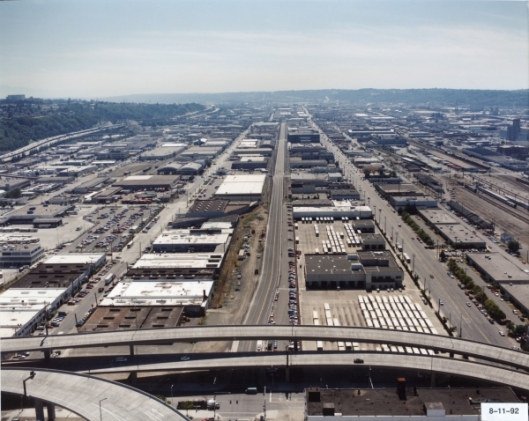 To learn more about aerial photographs in the King County Archives collection and elsewhere, please see our guide, Aerial Photographs.