How they built the bridge: Teamwork at Tolt-MacDonald Park, 1976

Forty years ago, the 1976 Bicentennial, commemorating the 200th anniversary of the signing of the United States Declaration of Independence, inspired projects celebrating American history and heritage, civic engagement, and community service.

One of the largest and most ambitious Bicentennial projects in the country happened at a King County park in the spring of 1976.

Aerial park site view, circa 1975-1976. The park is in the angle formed where the rivers meet. The undeveloped west portion area is the forested hillside in the upper left side of the photograph. Series 467, Park System Photograph Files, Box 6, Folder 25, King County Archives.

A Community Project for the Boy Scouts and the Marines

In 1974, Seattle banker John MacDonald approached King County government with an idea. President of the Chief Seattle Boy Scout Council and a longtime leader of his own church-sponsored Scout troop, MacDonald proposed a Bicentennial project involving all the area’s Boy Scouts. His idea? Scouts would develop trails and campsites on the west bank of Tolt River Park, and the U.S. Marines would build a 500-foot pedestrian bridge across the river.
“Just the type of cooperative project that we have been striving for!” — King County Executive John Spellman to the King County Council.
King County contributed $150,000. Scout Council project manager Don Gerber later recalled, “One of the nice things was that the county merely said, ‘Here’s the money. Build a park.’”

But the Chief Seattle Council of the Boy Scouts of America first had to persuade its 12 component districts to turn their annual “camporees” into work parties. After eight months, 45 meetings, and two scale models of the site (built by Eagle Scouts), everyone agreed. By early 1976, 18 months of planning had resulted in an ambitious six-weekend construction schedule.

Community Service by the U.S. Army and Marines

Bridge construction would be led by the Army Reserve’s 409th Engineer Company, an Everett-based unit under the 124th Army Reserve Command in Seattle. They would be assisted by the Regular Army, the Marine Corps Reserve, and the 6th Field Engineering Squadron from North Vancouver, British Columbia, who worked on an exchange basis with the 124th. All units operated under regulations allowing for domestic action that provided community services.

Training for the Army Reserve

Building a suspension bridge was also a training exercise for the 409th. Plans came from the Army’s Technical Manual 5-270, with modifications: larger handrails, anti-sway cables, heavier footings, improved cable anchor design, and additions to increase flood, wind and earthquake resistance. The bridge was built to last at least forty years.

In cold rain and hail, on April 24, 1,500 Scouts from the Shoreline and Viking (northwest Seattle) Districts and 400 leaders and parents turned out. 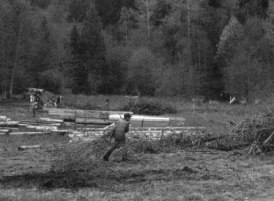 May 1-2: Working on a shelter roof. This weekend Scouts from the Cedar River and Central Kitsap districts were on site. 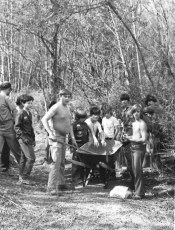 May 1-2: Early worries by leaders that older Scouts wouldn’t participate alongside the cubs proved unfounded.

May 1: Scouts taking a break beside a trail they are building.

May 1-2: The Army Reserve began to raise the 54-foot high bridge towers. Here we see the bridge site seen through approach piers.

May 1-2: The Army Reserve finished the towers and the main suspension cable work the second weekend of the project. 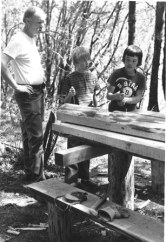 May 8: Assembling a picnic table.

Worksite panorama: main cables have been suspended from the bridge towers.
“It’s fun and it’s work….I think this is a great project because all the parks and campgrounds are so crowded and this will add more room for outdoor people.” — Mark Reed, age 12
“We guys would never work like this at home, but out here it’s a real project. It’s neat to see what we did today and to think about all the people will be able to come out and use this park.” — Jim Krie, age 13

On May 8, cool morning air gave way to a blistering sun. Thirteen hundred Scouts of the Cascade District (Bellevue and Redmond) continued work. Said a reporter for the Bellevue American newspaper, “Perhaps the most notable example of teamwork was the 200-person chain [of Cub Scouts] which passed rocks [for erosion control], one at a time from a rock source at the bottom of the hill to a destination on top.”

John MacDonald was often on site. “This will be remembered by every one of these kids every time they come back here,” he said. “Whenever they go to any park, they’ll remember the work that goes into it and they’ll appreciate it.”

MacDonald, aged 61, suffered a fatal heart attack on May 10, 1976. On June 1, the King County Council, honoring his “efforts and examples of community spirit,” added his name to the site known today as Tolt River–John MacDonald Park.

The bridge deck as it begins extending from the west bank tower.

View from the top of the trail.

Members of Thunderbird Troop 53 from the Japanese Baptist Church move logs to the hilltop. Each trip took an hour and each group made the trip twice. 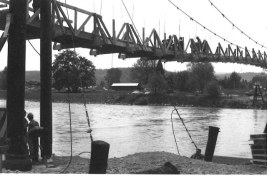 June 5-6: The Army Reserve had now finished the bridge, although not without some night work. Scouts contributed by nailing bridge deck flooring.

Site development work was completed by Scouts from the Polaris District (northeast Seattle), the West Seattle District, and the Mount Olympus District of Clallam and Jefferson Counties.

At the project’s end, 20,000 Scouts and adult leaders had put in some 75,000 hours of work. They had constructed forty hike-in campsites, five shelters and two large service centers; assembled ten picnic tables; opened miles of trails and drainage channels; and undertaken preliminary landscaping. King County estimated that the volunteer work had saved the county $1.5 million in labor costs.

The large scale of the project, and the amount of community cooperation and coordination that had accomplished it, drew local, regional and even national media attention. 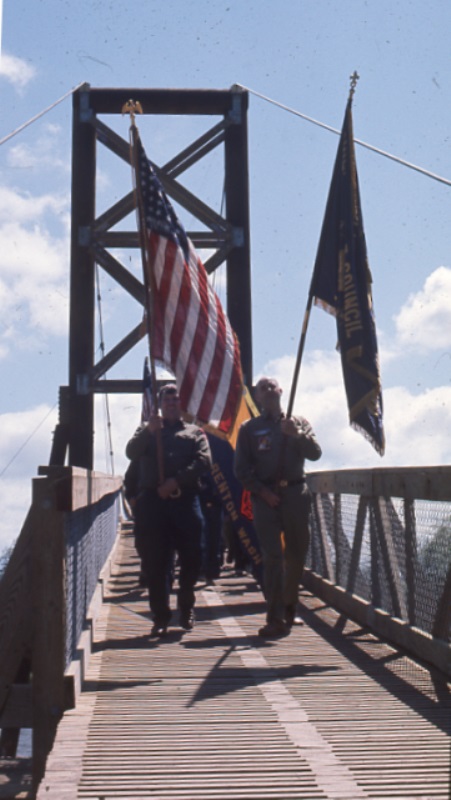 On a bright, sunny June 26, 1976, a crowd of 2,000 — County, Scouting and military representatives, members of local pioneer families, and onlookers — gathered to cross the new footbridge. A Scout color guard followed. On the west bank of the Snoqualmie River, the U.S. Navy band played, a historical pageant of Native American and pioneer folklore was presented, a Liberty Bell replica was rung, a monument to John MacDonald was dedicated, and a time capsule containing names of project participants was buried. Mrs. MacDonald cut the symbolic ribbon, an unidentified Girl Scout declared the park open, and Boy Scouts showed off their hard work.

“Kids get a great deal of satisfaction doing something on their own…. Let a kid build something, and it is his forever.” — John MacDonald 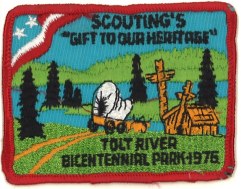 Where were you during the Bicentennial? Were you a part of the Scouts or the Army Reservists who helped develop Tolt-Macdonald Park in 1976? Tell us about your experiences!

October is American Archives Month!
The theme chosen by the Washington State Archives for 2016 is “we love parks.” This is the last of a series of four posts from the King County Archives on the history of King County Parks. 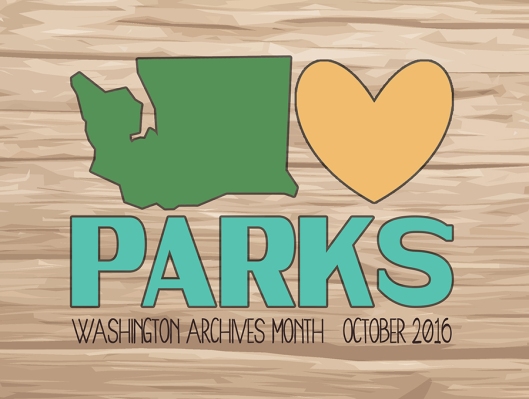